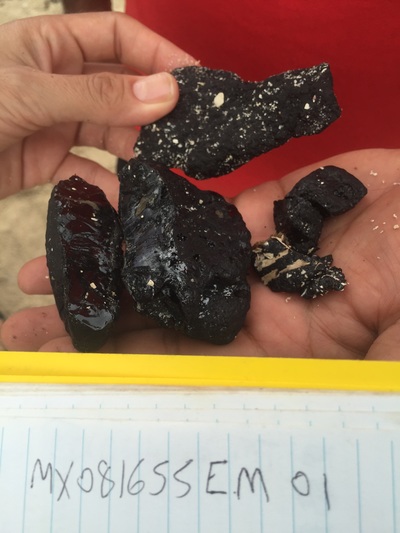 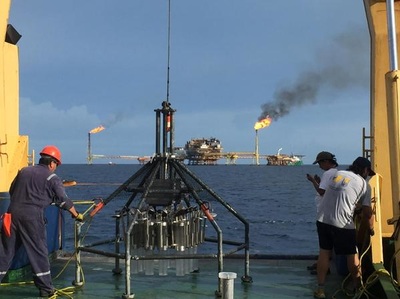 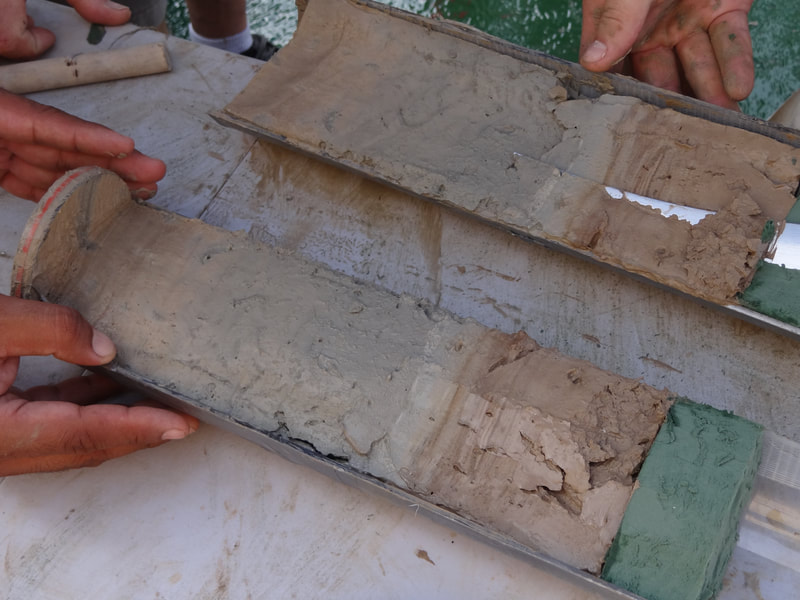 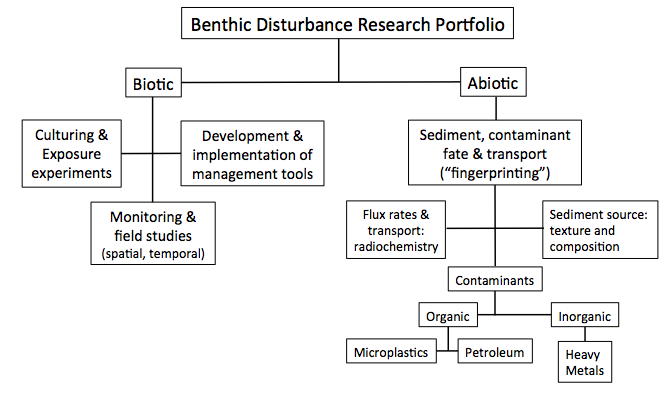 As an assistant professor, I currently have multiple projects in progress with undergraduate student involvement at all stages (from proposal to publication).  These projects include:
1. Microplastic abundance and impacts in Gulf of Mexico sediments and benthos
2. Benthic Communities and Endemism at inactive hydrothermal vents and nodule fields: baselines and mining applications
3. Characterizing the naturally occurring radioactive materials (NORM) in produced water from oil and gas wells and their incorporation into fish tissue and sediments
4.  Characterizing the formation and evolution of abyssal sinuous channel systems
5.  Sediment accumulation, burial, mixing and diagenetic rates in Gulf of Mexico Sediments
6. Providing baseline environmental measurements in support of ongoing Harmful Algal Bloom monitoring
7. Development of benthic marine biotic indices to support living resource management decisions

As a student at Eckerd College (2002-2006), I was a member of the GeoCrew, where I Collected vibracores, push cores, diver-assisted push cores, CHIRP sonar data, and surface sediment samples on land and aboard several research vessels including the R/V Gilbert for four regional projects; The Tampa Bay Project, Watersheds of the U.S. Virgin Islands, Hard-bottom research on Rattlesnake Key, FL, and Anoxic cycles of Charlotte Harbor, FL.  I also produced a thesis entitled "Regional Climatology and Anthropogenic Impacts on Coastal Sedimentation Patterns: St. John, USVI" and was able to travel to Fiji, Honduras, Antarctica, Cuba, and China for research, educational, and outreach purposes.

REDIRECT: Resuspension, Redistribution and Deposition of Deep Water Horizon (DwH) Recalcitrant Hydrocarbons to offshore Depocenters
​The research team proposes a geospatial, sedimentological, and geochemical approach to study the fate of the Deepwater Horizon (DwH) marine oil snow (MOS) deposited during the Marine Oil Snow Sedimentation and Flocculent Accumulation (MOSSFA, (1)) event on the seafloor in offshore waters of the Gulf of Mexico (GoM). The central hypothesis of the proposed research is that recalcitrant compounds from the deposited oil still remain on the seafloor ~7 years after the DwH spill, however, their spatial distribution and concentration do not correspond with the distribution of the surface oil slick or the subsurface plume due to resuspension and redistribution following initial deposition on the seafloor. Natural heterogeneity of bottom topography and circulation processes are key drivers transporting materials to deeper areas in the GoM by erosion and deposition of contaminated sediments beyond the surface extent of the once existing oil slick or the subsurface plumes(s). The results obtained in this effort will illuminate the fate of the oil released during the DwH oil spill, which is important for developing new mitigation strategies for future submerged spills in the GoM and worldwide. The seafloor depositional environment is highly diverse, which should result in a non-homogeneous distribution of material delivered from the overlying water column. Seafloor sediment is affected by currents, bottom morphology, and physical forcing events of different temporal and spatial scales that rework deposited material within the Bottom Nepheloid Layer (BNL). We hypothesize that the area of seafloor that was affected by deposition of oil from the spill is larger than the area of the surface slick extending into “downhill” areas on the seafloor (>1,500m) that have not been considered as having been affected by oil derived hydrocarbons. Through down-gradient transport, material will follow pathways based on the highly variable seafloor morphology, with its hills, slopes and canyons, allowing for erosion and deposition beyond the spatial extent of the once existing oil slick or subsurface plumes(s), and beyond the distributions mapped in the year following the spill, thus potentially affecting an area much larger than originally described and has been sampled to date (e.g. (2, 3).

CIMAGE III: Advancing the understanding of the processes, mechanisms, and environmental consequences of marine oil blowouts
C-IMAGE (the Center for Integrated Modeling and Analysis of Gulf Ecosystems) is a marine research consortium funded by the Gulf of Mexico Research Initiative (GoMRI) following the 2010 Deepwater Horizon oil spill.
C-IMAGE focuses on: C-IMAGE-III takes advantage of its large quantity of previously-obtained, field-derived samples, as well as investments in built experimental infrastructure and increasing sophistication of physical and ecological modeling systems. Field surveys of sediments, fish, water and microbes provide both time-series data documenting degradation of the Deepwater Horizon (DWH) signal in the various sample matrices, and broad-scale (basin-wide) samples that allow comparisons of the DWH-affected area with other regions of the Gulf (including Mexico and Cuba). Analyses of sediment cores, fish tissues and DNA, and microbial samples use the comprehensive sample archive. In particular, this effort focuses on combining C-IMAGE sampling with other information (e.g., NRDA and other GoMRI-sponsored research) to develop basin-wide maps of key environmental parameters such as sediment contamination and characteristics (e.g., type and grain size), demersal fish PAHs, stable and radioisotopes, sediment redox potential, marine mammal abundance, microbial, meiofaunal, macrofaunal community structure and other baseline characteristics relevant to understanding the extent of hydrocarbon contamination in the Gulf and impacts of potential future spills. These maps help in understanding the Gulf oil budget in the context of large spills.  These environmental baseline measurements also make it possible to quantitatively assess impact and recovery in the event of future human or natural perturbations to the Gulf of Mexico.

The focus of the Center for Integrated Modeling and Analysis of Gulf Ecosystems II (C-IMAGE II) is to advance understanding of the processes, mechanisms, and environmental consequences of marine oil blowouts. ​​New to the Center are three novel projects focused on establishing ecological baselines in the case of another Gulf spill. These projects include:Recent events like Deepwater Horizon focused the scientific efforts of C-IMAGE I, but C-IMAGE II looks to gain insight by researching a parallel blowout incident occurring 30 years prior.
The Ixtoc-I oil spill began on June 3rd, 1979 in the Bay of Campeche, 100 km NW of Ciudad de Carmen, Mexico. Nine and a half months later, the well head was capped and flow stopped, but not after an estimated 126 to 210 million gallons of oil leaked into the southern Gulf of Mexico; compare this to the three month uncontrolled blowout and 107 to 184 million gallons of Deepwater Horizon.

The Center for Integrated Modeling and Analysis of Gulf Ecosystems (C-IMAGE) is a research consortium of 19 U.S. and international partners focused on effects of oil spills on marine environments. ​Beginning in 2011, C-IMAGE received funding from GoMRI to study the processes and effects of the BP oil spill on the Gulf of Mexico. With help from domestic and international partners, we began studying the physical, chemical, and biological processes occurring when oil and dispersants are introduced to a marine ecosystem. Our consortium began connecting researchers across disciplines and academic institutions to create a holistic view of marine environments during and after oil spills. Through high-pressure experiments, calibrated modeling, and field research, C-IMAGE has laid a foundation for future research throughout the Gulf of Mexico.

​The Deep-C (Deep Sea to Coast Connectivity in the Eastern Gulf of Mexico) Consortium was a four-year, interdisciplinary study of deep sea to coast connectivity in the northeastern Gulf of Mexico. The study, which began in 2011, investigated the environmental consequences of petroleum hydrocarbon release in the deep Gulf on living marine resources and ecosystem health. Deep-C examined the geomorphologic, hydrologic, and biogeochemical settings that influence the distribution and fate of the oil and dispersants released during the Deepwater Horizon (DwH) accident, and used the resulting data for model studies that support improved responses to possible future incidents. 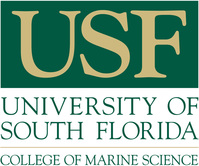 While at USF, College of Marine Science, as a Ph.D. student and postdoctoral scholar, I managed the Radiogeochemistry laboratory and worked in the Paleoceanography and Biogeochemistry Laboratory (Paleolab), I primarily worked on my thesis entitled "A Sedimentary Record of Regional Land-Use and Climate Change in the Manatee River, Manatee County, Florida."  However, I was also heavily involved with several other projects including:
1. Dry Tortugas National Park Seafloor Mapping
-Acquired sidescan and high-resolution bathymetric imagery of the Dry Tortugas National Park (DRTO) used for mapping topography and benthic habitat in the deeper areas of DRTO that are not imaged by other methods such as LIDAR or aerial photos aboard the R/V Bellows.
2.West Florida Shelf Ocean Acidification (2008)
-Determined the CO2 enrichment, organic content and carbonate content from surface sediment samples, and SEAS chemical parameter measurements along the West Florida Shelf aboard the R/V Suncoaster.
3. Radiogeochemistry of Puerto Rico (2008)
-Co-coordinated the push-core, surface sediment sampling, and water quality assessment of terrestrial and marine sites in Jobos Bay and El Yunke National Park.
4. Florida Straits Side-scan Sonar Survey (2008)
-Surveyed several previously unmapped seafloor features of interest using a pole-mounted Teledyne-Benthos C3D interferometric sidescan sonar aboard the R/V Bellows